One of humanity’s most cherished ideals is absolute freedom, yet to desire it, we need a mind. We constantly need something to get our work done, so are we truly free? Or just bound by the mere illusion of it?
Freedom is narrowly defined as the ability to act and express according to one’s desires, but in a broader sense, it may be described as “being free of everything.” But, can we ever be free, with a mind that thinks of it accord and skin that feels on its own? I believe not.
Even when we’re told “you’re free to do whatever you want with your time”, in its manifold lies the conditions applied. Would you call that freedom?
We don’t look at our bodies as a binding figure because we consider them a part of who we are but aren’t our actions governed by them? Are our desires restrained by its many mechanisms? So, what are we, if not the prisoner of our skin?
Even the narrowly defined ‘freedom’ is incorrect on many levels, for are we truly free to act and express ourselves when we are told we are? So, is freedom suffocated beneath the many obligations, or we are, by our inability to attain it?

Even the words that we use to express ourselves (that I am doing, right now) function as a restraint on our imagination, preventing them from going further. Words that aren’t even ours but borrowed by our minds and passed down; food that means a meal today would continue to signify the same tomorrow. We have accepted a set of meanings presented to us and think through them. Language is arbitrary, and no one knows who assigned meaning to various letters combined and we decide that a few letters we’ve never heard or seen combined, or that sound weird to pronounce have no meaning, while a word is just a word, we’ve attached meaning to some and so they have.
We even look at things from the perceptions that got molded by the surrounding we’ve lived in. Blanketed by freedom rests the many constraints. A chemical imbalance in our brain or sometimes a broken limb is all it takes to get our desires handicapped. We’re caught up in a whirlpool of events over which we have no control.

Sometimes we want to do things on our own but need advice and affirmation from others; other times, we require constraints because we believe they are necessary (and they might be). But are these thoughts simply the result of the people we grew up with or our surroundings? Is freedom even possible, or is it merely a far-off and intriguing concept?

Absolute freedom is impossible to attain, but freedom is viewed through multiple lenses and divided into numerous pieces. Politically, there is freedom of expression, freedom of religion, freedom of speech, and so on, but all of these are limited by laws that formed them in the first place or our ethics. And yes, boundaries are required, but would you call that being free in the purest and complete sense?

In general, the idea of freedom is subjective; its definition varies depending on one’s needs and desires. For example, for someone who has been confined to a room for an extended period forcibly, freedom would mean being able to leave it; for someone who desires self-sufficiency, freedom would mean achieving the same. However, when viewed through a wider perspective, freedom is much more and just as much an illusion, as there’s always something strangling it.

Then who are we if even our bodies are cages? We are all the thoughts that have been poured into us and the thoughts are us. 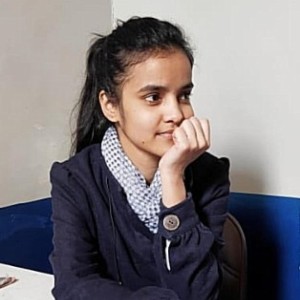 Sadia Quadir, hailing from Gaya, Bihar is an enthusiastic reader and writer currently pursuing her undergraduate in Communicative English from Aligarh Muslim University.

Sadia Quadir, hailing from Gaya, Bihar is an enthusiastic reader and writer currently pursuing her undergraduate in Communicative English from Aligarh Muslim University.